Over the years, several cute hippo salt & pepper sets became part of my collection. The sets are almost forming a mini collection. People who know me, know about my addiction to hippos, and of those, most know about my coffee addiction too, less severe, but equally incurable. This blog has a few posts with both themes. But this post will be the first featuring, salt & pepper, coffee AND hippos. My dear friend found this at the weekend market in Bangkok, and of course, had to buy it. Her comment: "This is sooooo you!" Dear Divya, I am so happy to be living closer to you again. Thank you for spoiling me with this lovely gift.  Can't wait to have some coffee with you again soon! HHHLL 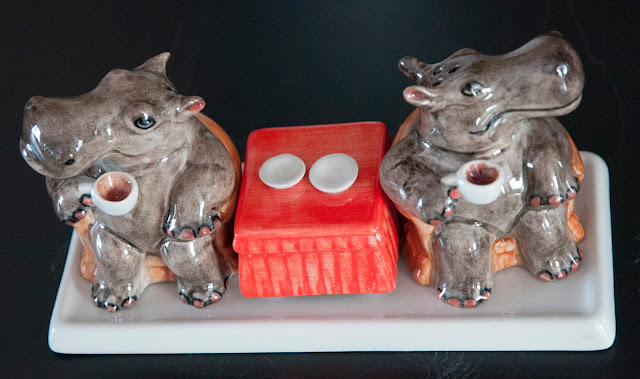 When it comes to artistic talents, I always feel those are very unfairly distributed. It seems that very often, people have multiple talents, or no talents at all. A few month ago, I met one of the multi talented kind. Her name is Byambajav Tsend-Ochir. She is teaching calligraphy at the Mongolian Fine Art Institute in Ulaanbaatar (or Ulan Bator) Mongolia, and she is a very talented ceramic artist too. Of course, almost every conversation I have with any artist, will quickly turn into a hippo-oriented conversation. She had never made a hippo before, but was happy to try. So I am pretty confident in claiming, I have the first Mongolian ceramic hippopotamus. Since we will be living here for a while, I am sure it will definitively not be the last. If you look very closely, you will see that the hippo is decorated with traditional Mongolian script. It gives this hippo that extra special something, making it such an unique piece, in every way. 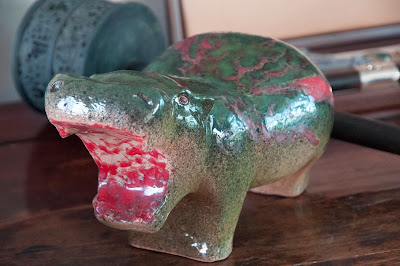 It was in October, 2017. Suddenly, a post appeared on the Face Book page of Hippolotofus (International Hippopotamus Society). One of the American members found a beautiful ceramic hippo, while being on a business trip in Amsterdam. She found the  hippo in a souvenir shop, selling Delft's Blue (famous Dutch porcelain). I could not believe my eyes. Being Dutch, and having visited Amsterdam so many times.. but never ever having seen this Delft's Blue hippo, how could that be? Then I wrote to this fellow hippo collector, and things got even worse... because it turned out, I knew the shop too! So, within minutes I went online, wrote to the shop (in Dutch). Yes, they still had a few (M. de Wit collection), and yes... they did ship worldwide, so Mongolia was no problem. A few weeks later it arrived, thoroughly packed, and in mint condition. I could not be happier.

Dear Stephanie, thank you so much for sharing your find. Being Dutch and collecting hippos... my collection would have been less complete without this one. Since you found it, I decided to name her after you. 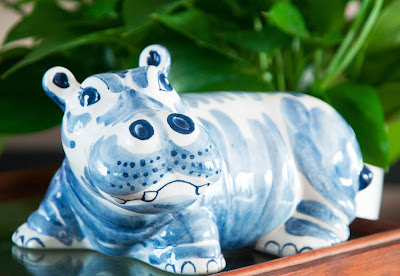 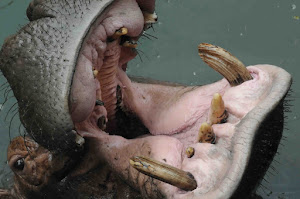